Celebrating 40 years with Weidmann in 2021, Barbara Patoine is a key member of our North American sales team based in St. Johnsbury, Vermont.

We decided that this was a good time to get to know this long-standing employee better!

Q: Firstly, let me start by congratulating you on passing a milestone this month. 40 years at Weidmann is an incredible achievement! Can you sum up your 40 years in a few words?

A: I guess the adjectives I would choose are the same as would apply to life in general: fun yet sometimes annoying, challenging yet sometimes tedious, gratifying yet sometimes frustrating. One needs rain in their life to appreciate the sunshine. One of my favorite quotes reads: “Some people weave burlap into the fabric of our lives, and some weave gold thread. Both contribute to make the whole picture beautiful and unique.” ….And no, I am not going to reveal who at Weidmann represents the “burlap” in my life…!

Q: You have had a very successful 40 years at Weidmann, starting in customer service and then moving into a sales position. Working for the same company for the whole of your career is an incredible achievement and personal commitment. Can you tell me what influenced this?

A: I guess it’s in my genes. My Dad, who is 93, thankfully healthy, and lives only 7 miles from me, worked at a local company in Lyndonville for 45 years. I remember thinking that was an unbelievably impossible achievement. Now, look at me. I’m almost my Dad! Which, by the way, I consider to be an incredible compliment to myself.

Truthfully, convenience certainly played a role. With a 7-minute drive to work, and until fairly recently, not even a traffic light to deal with, Weidmann has been a very convenient place to work. These days one’s job does not often require being “on-site”, but for much of my time at Weidmann, it was required.

But I believe most importantly, Weidmann allowed me an opportunity to expand beyond my own comfort zone, to challenge me, and allow me to further develop my skills, advancing my career and level of responsibility. Of course, it always helps when you are also given the opportunity to travel and see the world as part of your role!

If you had asked me early in my career whether I would consider a role in sales, I would have never imagined this. My perception of a sales role and the stereotypical person in this type of position was not something that particularly appealed to me! But Weidmann offered me the chance to challenge myself and my own perception and I soon realized that the skills I possessed could bring success in a sales environment and I have never looked back since. 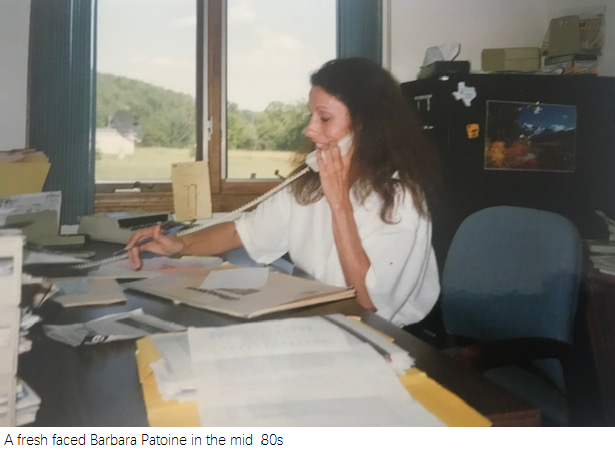 Q: Looking back, can you identify an individual (or more!), who influenced your career and why?

A: I am sincerely grateful to the people who allowed me the opportunity to initially join and grow with the company. People who influenced my career the most include:

Doug Conly, who hired me as a 23-year old who had just returned home to Vermont after being away for 3 years on the island of Guam and 2 years just outside of Memphis with my husband who was in the Navy.

Waite Worden, Dick Stone, Lee Seymour, and Chris Robbins (from the early “System Sales” days) had faith in my ability and provided me the opportunity to grow my responsibilities and role within the company. It was with their belief in me and support that I initially became involved with customers and suppliers internationally, dabbled a bit in sourcing; and as a result of our gaining representation of a Swedish porcelain manufacturer, ended up in Sales.

Also, my mentor of many years, Marty Feltus, whom I greatly admired as a strong, self-assured, extremely capable woman within the company. For many, many years I wondered when/if I would ever feel as confident in myself as she always appeared to be.

Q: How do you relax?

A: When I am not working, I can typically be found in my garden or for 6 weeks of the year in the Bahamas (taking a break from the cold Vermont winter!). I am a passionate gardener and enjoy the challenge and results of cultivating more than 3,500 sqft (325 sqm) of garden with 12 different planting areas.

Q: And to finish with, can you tell us about your most memorable sales trip/experience from your 40 years with Weidmann?

A: It was relatively early in my Weidmann career: I had been visiting colleagues and customers in Europe and took the opportunity to spend a weekend sightseeing in France. My colleagues had organized a rental car and a nice route that would fit my available time.

At one point I came upon the entrance to a tunnel with signage (in French of course, which I do not speak, despite having the last name Patoine…) which seemed to indicate that I should not enter the tunnel but take the alternate route to the right.

I soon found myself on an extremely narrow winding “ledge” with a vertical cliff rising to my left and (more concerning) a vertical cliff dropping about 500’ (150m) or more to my immediate right! There was barely room on the roadway for my tiny car, and I became frantic about the possibility of meeting a vehicle coming from the opposite direction. After what seemed an eternity, I could see that I was finally approaching the end of this harrowing jaunt, and as I rounded the last curve, I saw that I was approaching a look-out area where numerous people on bicycles were looking out over the vast expanse into the depths below. It turns out I had taken my little car onto a path intended for bicycles…!